This campaign wants to finance a reprint of the selected works Ibrahim Kaypakkaya’s and aims at printing and publishing them in book form. For printing the book, we require financial support.
This is a non-profit-campaign. All of the proceeds from the sale of the book will be donated to political prisoners in Turkey. 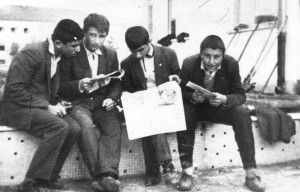 Founder of the Turkish Communist Party/Marxist-Leninist and of the People’s Liberation Army TIKKO.

Ibrahim Kaypakka was part of the leading personalities of  the revolutionary movement in Turkey and marked a change in the movement with his theories.  In contrast to other 68 revolutionaries like Deniz Gezmis and Mahir Cayan, he distinguished himself from many other revolutionaries by rejecting the state ideology of Kemalism and declaring it as fascism. He was also the one who referred to the situation of the Kurdish population and spoke up for their right to self-determination.
His theses and works focuse in detail on revolutionary questions and elaborate them. His political views were and still are considered dangerous by the Turkish state and therefore their distribution is feared. So Ibrahim Kaypakakkaya was arrested and tortured to death after a long period of coldblooded torture. The CIA classifies the theses of the only 24 year old Kaypakkaya as the politically most dangerous theses in Turkey and the Middle East. His writings are banned and persons, who do distribute them, are going to face draconian penalties, almost exclusively long-term-imprisonment.

So it’s very difficult to make his writings accesible to a broad public. The present project now gives us the chance to publish his writings in German language. But for achieving this, we need financial support, which we want to use to print this book.

At first the book will be translated into German and will be followed by its French translation. The first edition of the book (German/French/Persian /Arabic) will consist of 500 copies. When needed, the second edition will also be printed with 500 copies.
The book will be sold online (kaypakkaya.blogsport.de) and via direct sales.

The book format is: A5, coloured soft-cover, 90gr paper b/w

The aim is to print and to publish the book until May 2016.

Support Without Donation
Not everybody is able to donate. But we would be pleased if each of you could support the project by spreading it via Facebook, Twitter, E-Mail etc. So you will enable us to reach a broader public.